The last few months have been extra busy for the whole team here at Polystream, so to keep us feeling positively connected and have a productive change of pace, our VP of Engineering, Cheryl, suggested organizing a hackday; our very own ‘Fantom Jam’.

The brief was simple; using our new Fantom IGS Engine as the starting point, go and do something amazing with the time you have. It doesn’t matter if you don’t fully realise your idea, you can present the concept of how you would implement this in whatever form you like. This was no easy task, as working remotely on complicated projects is already a challenge let alone trying to organise and build new teams to creatively come up with something shiny and new from scratch in 48 hours!

We started by clearing everyone’s meetings and scheduled tasks from their day jobs well in advance of the hackday, so that for two days everyone could enjoy the freedom of joining the Fantom Jam.

The aim was to bring everyone together to spark creativity and innovation, encouraging the teams to work with other disciplines to develop real product ideas – no matter how wild, ambitious, or just plain crazy.

A week before the event we asked everyone to submit ideas to a Trello board. We had a company meeting to run through the ideas and align people to teams so that everyone could participate and collaborate. We had 7 ideas / teams ready for the Jam to start.

We had a kick off meeting on the first day to set expectations and then the teams were left to their own devices, quickly turning their ideas into reality.

Throughout the two days, different teams faced different challenges; some of which were too big to overcome in the limited time they had, however, the core idea of this event was to celebrate learnings as much as successes. As Aaron, Snr Devops Engineer, put it: “My idea didn’t work, but I learnt loads!” In the case of Team Jammed Jars, who took on the idea to bring about running our applications within containers, their team captain, Snr Software Engineer Mike, said;  “We didn’t complete the implementation but had really good discussions around it.” This was a lot of work for two days, but the team did a great job at proving out the theory and highlighted what else was needed to complete this important part of our infrastructure – something we had hypothesized about for years and now was almost proven out in 48 hours. This will be something that we will go back and finish as there are so many advantages to containerisation.

We encouraged the teams to stay connected and virtually keep open communication channels using tools like Slack and Zoom, making them feel as they would do in an office environment as much as possible. We issued everyone with takeaway food vouchers to give the teams spaces to take breaks and have a chat over lunch together.

At the end of day 2, all the projects at whatever stage they had got to, were presented and judged by a panel of technical and (mainly) non-technical individuals; Adam, CTO and Co-founder, Marie, Finance Director, Erla, Director of Business Development, and Michelle, Director of Operations.

Michelle made the presentations feel like an awards ceremony by shipping out craft beer from a local brewery (and some were very ‘crafty’ indeed) to every participant, as we couldn’t all meet physically in the pub to raise a glass to each other in celebration of everyone’s work, so we did this virtually.

Besides taking into account the final product, the judges were keen on finding out about how teams had worked and how being remote had influenced the final product. Octavian and Joe, who formed Team V-realization, are a perfect example of how two different people working on the same idea had two very different experiences. “To be honest, Octavian and I are usually in the same room [back in the office] and we still communicate anyway via Slack!” said Joe. He continued: “but for some reason I was a little stressed about this, and I must say I am not one for competitions.” Octavian, who won the ‘Spirit of Polystream honorary mention’ from the judges for assisting with several of the hackday projects said: “for me it was very engaging and interesting!”

These two comments illustrate what Jarl, VP of Technology, points out: “We need to be mindful that people have different ways of working, and they don’t all enjoy the same things.” Something for us to all bear in mind as we find new ways to collaborate and work together whilst apart.

The thing that was really striking during the Jam was how many people sacrificed their own hack in order to help others. The real spirit of Polystream is seen when engineers help their fellow engineers, and everyone demonstrated this at some point, but all good competitions need a winner, and Team Xanax eventually won with their game overlay hack that aimed to implement:

Data could be aggregated over some time periods, and everyone agreed the potential applications of this idea – of what we could start doing with it tomorrow –  was really exciting. 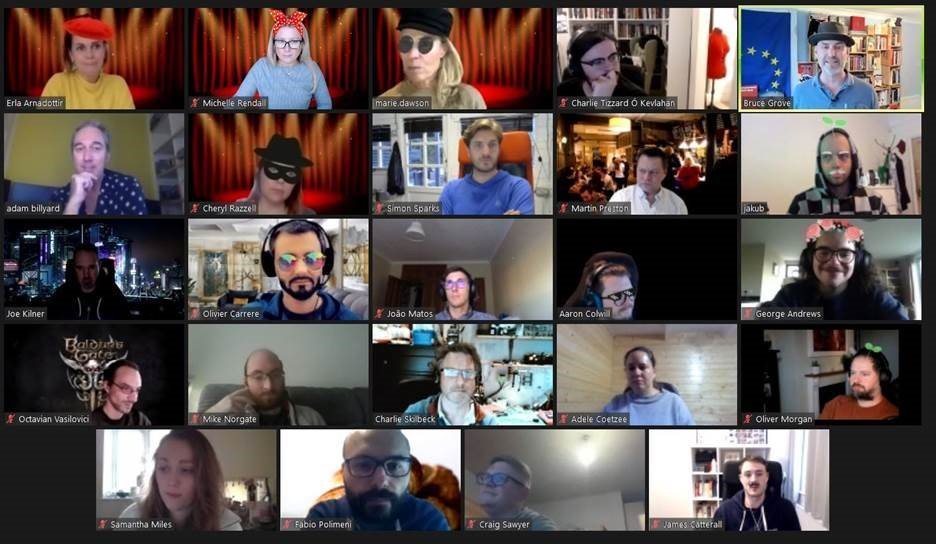 One of the key ideas behind running the hackday was to get everyone involved, not just people on the team who are technically savvy or engineers. Our Head of Talent Simon brought his background in games development to create a hack called “Hats on Bots.” He had a million other great ideas, each of which would have needed a small army to build in 48 hours. Despite people like Simon having never used UE4, it was refreshing to see him, and every member of the team got involved and gave it a go! With everyone offering each other support, this event was inclusive and taught everyone new skills, and at the very least, gave us all confidence in what we are good at, whilst building trust and making us all feel part of a bigger picture.

“In the run-up to the event, just the thought of it stressed me out,” said Adele, Software Engineer, “however, the two actual days of the Jam were great! The way my team divided the work didn’t feel stressful at all.”

We have been so impressed by the quality of the hacks and what was achieved in only two days that we will be running another Hackday in January. Now the team knows the format, they are already starting to think of ideas. Not only have we shown what our team can achieve together in an amazingly short space of time, we’ve shown that the energy and comradery amongst us is really positive. We have now actually sped up delivery on key parts of our product roadmap and we shall be taking this energy and some of these ideas into production ( with the luxury of having a little more than two days to spend on the next iterations ) 🙂

“The after effects of the Fantom Jam can still be felt in the team, and they’re all good. As a direct result of it we’re planning out projects such as integration with Electron (for UI) and we have a better understanding of the road ahead for containerisation”, reported Jarl in our Monday morning stand up over a week later. “There were good comments and feedback raised in the retrospective, and the overwhelming sentiment is that having these targeted and driven days-of-code across teams is something that truly unlocks the innovative power of Polystream. Big thanks to everyone, and big thanks to Cheryl for taking the initiative for this!”.

The main thought to come out of this Jam was best articulated by our CEO Bruce: “Now we know all this CAN be done, let’s lead the way!”.

After all, how hard can it be?